The hutongs north of Beijing’s Forbidden City have always been my favorite part of the city. Narrow alleyways, curving about, full of chaotic day to day life.

Or so, that was my experience hearing my mother’s stories from the early 1980s (as a Hong Konger living in Beijing as it opened up), followed by my own stories exploring the hutongs in the 1990s (living in Beijing as a kid) and then in the early 2010s (living in Beijing as a 20-something). Returning recently in December 2018, the chaos was markedly amiss. As I spent a couple days walking through my old streets, something felt different. Where were the sounds and the life that used to spill into the streets? Where were the callers, for new down blankets or snacks? Out in the streets were mostly workers (for construction and ecommerce, two types with vastly different aims). Yes, it was the start of winter; the cold northern wind blew through, making the local corrugated metal weeze. Yes, it was during a weekday. But, Beijing residents are not known for avoiding the outdoors on cold days, certainly not weekdays. Something else seemed up. 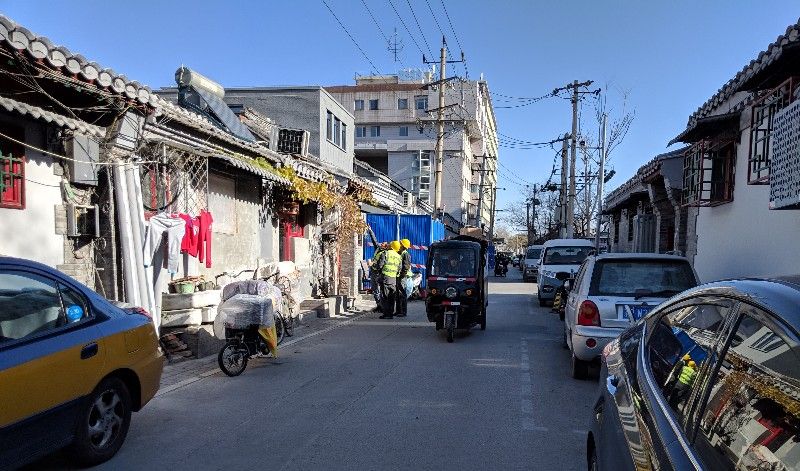 About 18 months ago, starting in the spring of 2017, the Beijing city government started bricking up local small businesses in the hutongs. You can read more about it in this NYTimes piece here . To summarize: in an effort to “transform Beijing’s bustling, overcrowded city center into a futuristic capital” the city has been making sweeping efforts to “rid it of uncontrolled development and ‘low end’ entrepreneurship”… entrepreneurship it once encouraged. These holes in the wall, where new arrivals to Beijing once set up shop, contributed to the liveliness of the hutongs. That has now changed. Seeking a more streamlined smooth wall appeal for the ancient alleyways, the city has forced many of these small businesses out. For those allowed to stay– most have had their alley-facing storefronts “bricked up” to preserve a whitewashed air. Now, only interior signs mark the businesses within, simple lettering hidden behind standard-issued windows. Customers must now access these stores through entry to the courtyard, when before they could access them directly from the street. 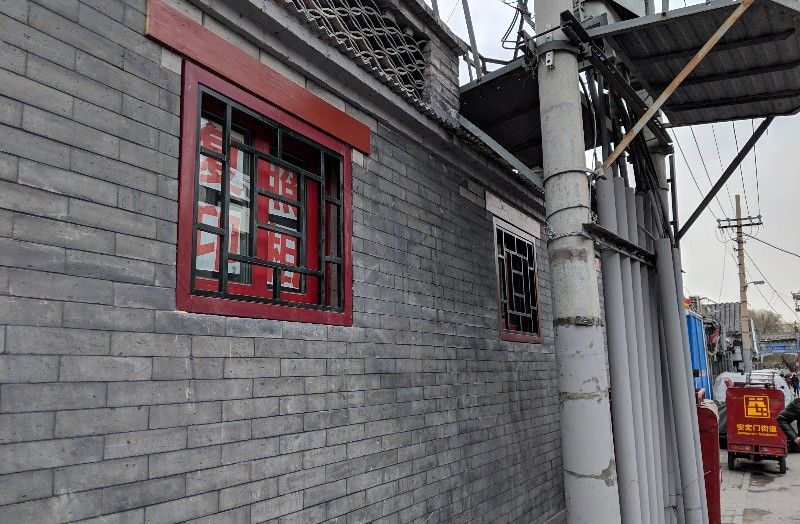 After my first walk through my old hutong, I realized that many businesses had just lost their street-front accessways and could still be visited from other entry points. So, I went searching for the small businesses I once knew. The young family fruit sellers. The older woman laundromat. On poking about, courtyard by courtyard, the young family was nowhere to be found; the next door vegetable seller (not nearly as good produce!) didn’t know what happened to them. The older woman laundromat moved just a few months prior; the neighbor I spoke to did not know where she went. Where did these inhabitants go, now that the builtware could no longer satisfy their livelihood needs?

I wonder how Stewart Brand would have discussed Beijing’s Hutongs in his 1994 book, How Buildings Learn. And I wonder how that narrative would have evolved with this recent change. Of course, any such narrative must come with a preamble expressing the humility to only know the recent instantiation of the hutongs (compared to, say, over the past 500 years, to be conservative). And from the perspective of a foreigner, no less! But, for our purposes here, let’s take that humble recognition as a given.

Two themes caught my attention in this long forgotten How Buildings Learn chapter on Beijing’s hutongs.

Wholesome chaos. Brand writes in HBL: One way to institutionalize wholesome chaos is to disperse significant design power to the individual users of a building while they’re using the place. In the MIT Rad Lab style, the Beijing hutongs (as I knew them, let’s say their instantiation before the recent beautifying project) were a place of malleable creativity to match the needs at hand. Residents had design power, adapting the spaces to their market and living desires. Wires crisscrossed everywhere. Regal siheyuans turned into multiple family residences turned into true mixed use, commercial-residential builtware. Cabbages (and let’s not ignore the unfortunate trash) added pyramids of color. Steam spilled into the streets from baozi steamers. This was true wholesome chaos, in a lively Jane Jacobs sidewalks kind of way. Taking away design power, as the Beijing city government is doing, didn’t just hide ongoing livelihoods from view, it quashed them.

Economic metabolism. Brand writes in HBL: The form of cities persist for centuries, but their intense economic metabolism consumes their physical substance. The general narrative of cities is that they become the converging point for new entrepreneurial agents. The hutongs could serve as a one-stop shop for all ones needs– breakfast foods, lunch foods, dinner foods, fruits, vegetables, meats, buns, shoe cobbler, bike fixer, hair cutter, window installer, laundry washer, (and don’t forget the public toilets!), bathhouse, betting tables, chess matches, exercise equipment, water distributor, community center, school, police office, healthcare clinic, pharmacy, hardware store… you name it, it was there– all within a close vicinity, ready for business. The metabolism thrived on this outward display of goods and services. Kick out those who sustained it, and you lose the economy. Lose the economy, and the urban buildings are reduced to shell. I think that Brand would have written that the economic metabolism of Beijing’s hutong residents should be able to dictate the hutongs evolution. Not an imposed desire for superficial aesthetic.

All of this resonates with a question I’ve been thinking lately with regards to buildings– what gets to stay and what must go? As Brand writes in the original How Buildings Learn: At their worst, code enforcers block creativity and defy reason, answerable to remote abstractions that have nothing to do with the present case or opportunity. So, how do we reconcile desired abstractions and present opportunities? How do we preserve at least a minimal amount, while still allowing for variation for ongoing change? I’m an advocate for *some* preservation. These are the artifacts from cultures past that can provide us with some insight into life before, for hopefully new inspiration in the future. But not everything can be preserved. If that was the case, there’d be no space for new growth and adaption. So for Beijing’s hutongs today, what should be preserved? Should Beijing preserve the streamlined aesthetic of the hutongs, or the quality of its hustle and bustle? What stays and what goes?

Sidenote: There’s an interesting contrast here to contemporary San Francisco. New people want to build new small businesses, but can’t afford to live in SF. However, they’re not officially being kicked out. In Beijing, for those who wanted to build new small businesses, they found a way to be there. But now they’re officially getting kicked out. The outcome for both cities is a muddle of people wanting to build new things, harvesting the benefits of said city, but then not being able to do so. Not for lack of success, but for lack of access, whether access through affordability (SF) or access through permits (BJ).

PS. Note that I don’t touch on other outside market forces that might have also impacted the small businesses of the hutongs. For example, with the ability to top up phone cards directly through WeChat, the sale of mobile carrier top-up cards no longer was a feasible revenue stream for little bodega XiaoMaiBus. That being said, this doesn’t apply to the variety of businesses within the hutongs, all of which have been (negatively) impacted by the ongoing beautification program.