The following is an elaborated transcription from an in-person dialogue on Infrastructure. For a more navigable version of this content, see this Notion page. 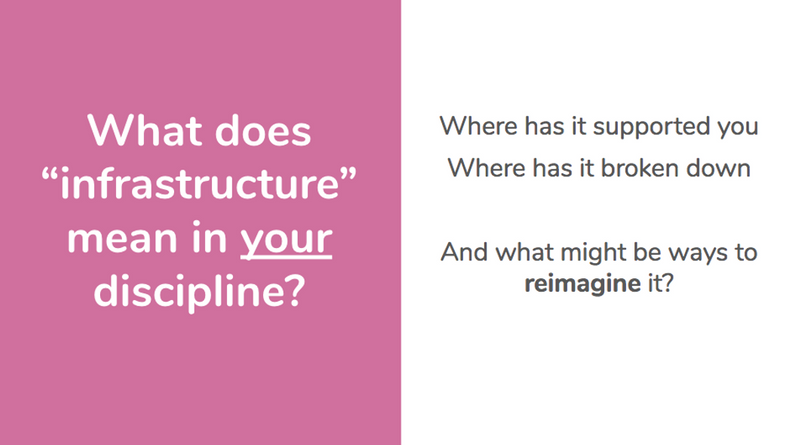 This session is going to be an open conversation. I’ll first seed it with my own thoughts from my own discipline, and will then open it up for others to share what infrastructure means in their personal field.

Objectives for a dialogue on Infrastructure

How can we take people from different disciplines and together speak to what infrastructure means in our own experiences, from our own backgrounds? My goal here is to connect the dots. Ideally, this session is for you to take thoughts back into your own day to day— to apply new perspectives to what you’re wrestling with. For me / the speaker, the benefit is to hear your thoughts and comments and—if useful— to then weave and integrate it into what I’m doing personally.

To start with some background about why I find infrastructure so fascinating: I come from a civil / environmental engineering background and then worked in green buildings in China for many years. These days, I’m work on the downstream technologies side, in partnership development for a software-based company that integrates into existing building systems to allow occupants to better control their space, especially in non-residential areas where ownership becomes very interesting.

My interest in Infrastructure Across Disciplines has come up in several ways. For one, I’m fairly new to software. Given my civil engineering background, I always felt that infrastructure was “my” word. Then I moved to the Bay Area and all of a sudden I hear it being used all over the place… all throughout software. WHAT?! It took me a long time to grasp an expanded meaning of Infrastructure, with the realization that really it is a shared meaning. To me, infrastructure is the underlying foundation of organizations and systems that enables things to persist and grow.

I believe that infrastructure is the underlying foundation of organizations and systems that enable things to persist and grow. This is similar to the ideas that Anton was mentioning earlier… i.e., that there were important, informal institutions during the Industrial Revolution that fostered the expansion of ideas. I totally see this as infrastructure.

What’s to come? I’ll start with a 15 minute story of where I’m coming from, and then open it up to conversation from there. BUT FIRST— I’m going to do an activity because it’s late in the day. Everyone please stand up. (I promise no Turkish Get Ups. Really, you all just looked really sleepy, so I wanted us to stand.)

So: Recall a moment when you were in a building and the actual physical experience of it was amazing. Just like… think about it… what was that like… where were you… what were the factors of why you were there… what made it such a great experience…

And now: Think of a time you were in a building where the experience was terrible. How was it awful, why was it awful, and what did it further impact?

What is infrastructure in the buildings industry?

For me, when I think about infrastructure in my industry— again, first from a background of engineering design for a building to now the technologies that go into that building— I see infrastructure from two lenses:

One is the actual control of the environment. So, both the ability for an individual to control pieces of the built world and have information about it, that can help that individual influence her further decisions about where she wants to be, and about how she wants to make use of the space. As a society, our ability to control and condition the environment allows us to spend more time thinking, experimenting, creating, staying healthy.

The other lens is the agreements by which buildings are actually built… but then not just built, to then be occupied and maintained. (Note that I come from a background of high rise commercial buildings, not residential homes.) How buildings are built is often very separate from how buildings are then maintained. We call a building a building, and yet, once it’s been built, it doesn’t continue to be built, it is already built. Why then does the word deserve an “ing”?

There’s a framework that Geoffrey West lays out in his book Scale that I’ve found to be very influential. It has really informed my thinking on this idea of infrastructure, and I continue to come back to these three postulates of networks.

According to West, (1) networks are space filling, (2) the terminal units— whether capillaries or electrical outlets— are invariant, i.e. they’re always the same size, and (3) systems evolve toward an optimal state. 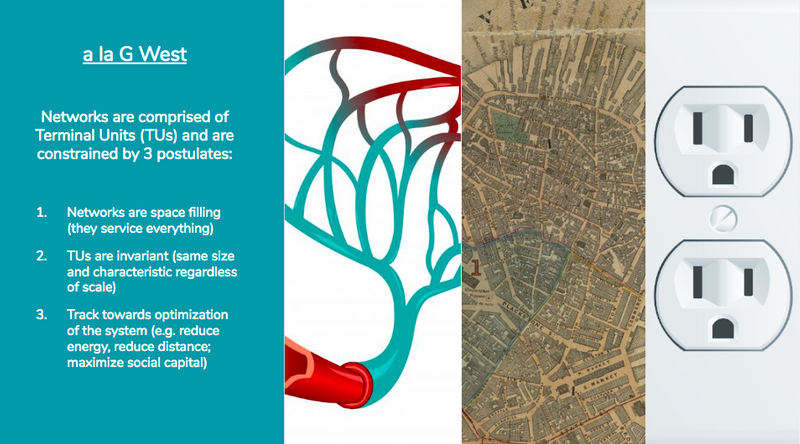 If you think about the body— say you harm yourself and have a deep wound, that wound heals. It takes some time, but your body adapts. And yet for a building (especially one with multiple tenants were the ownership structure is stratified) this is not the case. Let’s consider the space that we’re in right now. Say that the old tenants move out and we now move in and want to make changes… it is often very difficult for us to do that. I’m not referring to the structural efforts like changing a wall or re-arranging new outlets. I mean it often becomes difficult for us to adapt a space because we do not have the correct information about what is in our space in real life, and who is accountable for it. The building does not adapt in the way you might expect. And I suspect that the way we have organized the creation process of buildings is a reason for this.

On the topic of environmental control & experience

The built environment has a huge impact on how we engage with the world— how we create new ideas, and segregate others. And yet, there are so many ways that we, at this point, take buildings and the systems within them for granted. Just think– we can now live in Dubai because of air-conditioning. We can live now in Florida. A perhaps more obvious achievement is lighting , top of mind given the recent Nobel Prize. How has the accessibility and affordability of lighting acted as a simple enabler to catalyze “progress”?

Over time, complexity increases. I’ll give an example. About a year ago, my company moved into a WeWork. WeWork tends to lease floors in a building as a tenant, and then build really, really fast– retrofitting the space so they can move on to the next one. The sooner they can open, the quicker to revenue. But if you actually look up— which we tend to not do very much but I like to do it often— for all the little offices, all the conference rooms they’ve built out… they do not match at all with the systems in the ceiling, like the HVAC system. This is because: unless they’re making changes to the core and shell of the building they are not mandated by code to do much to the base building layer. Over time, as new tenants come and go, this results in the base building systems not matching the tenant layout. HVAC does 3 things: (1) heating and cooling, (2) maintain pressurization of the building, (3) provide minimal air quality, but it’s typically a base building system. When it doesn’t match the tenant layer, you end up with negative impacts like temperature issues for occupants or unnecessary energy use.

When I think about reimagining infrastructure in my discipline, I think of: how can we re-organize the agreements structure that ultimately impacts the information, control, and experience of occupants in a building. There is so much lost potential. I believe that because buildings are so inflexible, this limits our ability to scale new and significant ways to interact with our built environment and the systems dependent on them… like scaling  Dynamicland  to reach more people, encouraging more innovation in air-conditioning, or deploying more built-environment solutions to address public health.

Can we rethink the way that these project delivery teams are incentivized such that an architect might actually capture value if someone down the line were to make a change in the building… incentivizing more flexible buildings? What is the version of a quickly updatable building that would allow new and useful systems to be readily deployed? 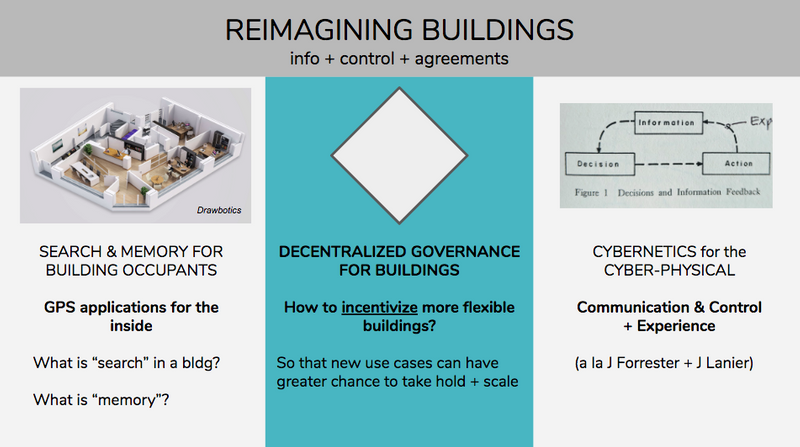 Just to clarify, I think there are two different ways that a building can be flexible.

One way is where the building is intentionally built to be real-time flexible. Where it’s easy to move walls around, or convert a big space into a smaller space, or, in the example of MIT’s Rad Lab, the occupants have free reign to do what they please.

The second way—the one that I’m trying to explore here— goes beyond that. How can the agreements for how a building is built and maintained allow for greater flexibility? In my real-time flexible walls example… what if a school now comes into that space and doesn’t want those walls to move? Now expand that to think of a multi-story building where you have lots of different tenants, who are changing over time. You end up losing the documentation necessary for the structure and the systems within the building; it doesn’t match what we ultimately see in real life. How can you incentivize the players in the value chain to ensure that there’s some “ground truth” to what ultimately is built and then continues to persist in real life, so that when a tenant or occupant down the line wants to make a change, they can have all the information they need to make the best decision? This documentation is necessary to make the best change possible, in the shortest amount of time, with the least amount of wrangling burden.

Machine learning and norms of dissent

On names and definitions

The flow of conversation 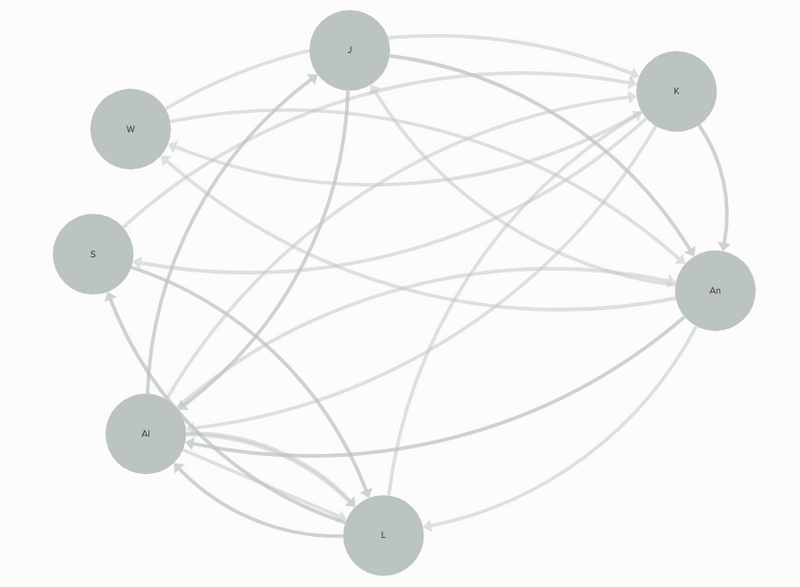