Source: Multiple
Note type: Inspired
Boeing’s 787 Dreamliner: “The coordination and outsourcing risk.” On the internal debate re outsourcing for the Boeing 787
Note: The Hart-Smith paper is most interesting, and the additional two articles provide greater context, benefit of hindsight
Input to Boeing’s internal debate around outsourcing:
For greater context:
Additional comments from family/friends in the industry:
L.J. Hart-Smith

To summarize
Re: contracts, avoid perverse incentives to work at the speed of the slowest supplier. Example of this: penalties for delay but no rewards for delivery
***
Outsourcing is looked upon by management as a tool for reducing costs. But unresolved question is: WHICH COSTS? And WHAT IS THE EFFECT ON OVERALL COSTS?
Selective outsourcing can be beneficial to *all* concerned
Outsourcing as a supplement to sales activity may be justified but needs to be recognized as an ADDED COST not a COST REDUCTION
If outsourcing IS to be employed, must be absolutely necessary and that the parts / subassemblies are designed with that process in mind (the is at additional up front effort)
Oftentimes it is less costly to produce something somewhere because it is NEW to produce it there. Over time, rates became established and increase, and so the company moves to the next greenfield [ME: example = Clothing manufacturers first to China now to Indonesia because too established / expensive in China]
This might work for some industries, but not for all
Given that modern management seems to believe that more and more outsourcing is a necessary step to becoming a systems integrator, and that this is presumably more profitable than being involved in the manufacturing work, one is entitled to ask who receives the greatest largesse from extensive outsourcing. History suggest that it is the supplier, not the prime manufacturer, who has benefited the most.
First question: what is outsourced and what is retained
Additional tasks: write a spec of the product. which must be more complete and precise than if for in-house production. One must ask the question as to where the skills for writing such specs will come from if there is no continued in-house production from which to learn
^[MY ADD]: process knowledge! full stack!
Next is obvious need for additional transport costs associated off-site production and the increased total span time this cause.
Next obvious is need for rework, delays for replacement parts, and recriminations as the source of any error is uncovered
To minimize these problems, it is necessary for the prime contractor to provide on-site quality, supplier-management, sometimes technical support. if this is not done the performance of the prime manufacturer can never exceed the capabilities of the least proficient of the suppliers
If this is not done, the performance of the prime manufacturer can never exceed the capabilities of the lease proficient of the suppliers. these costs do not vanish merely because the work itself is out of sight.
No incentive for suppliers to design assembly tools that permit minimized rework for derivative products, particularly when they have no guarantee that derivatives may ever be made or that they would be awarded the work.
Example cost reduction study:
x% of the suggestions could have achieved a cost saving had it not been for non-recurring costs associated with already being outsourced.
How many steps are associated with sequence of assembly?
“Somewhere someone had saved money and time on the original design task by not completely planning the entire assembly operation. this is one of the most classic of sub-optimum solutions.” 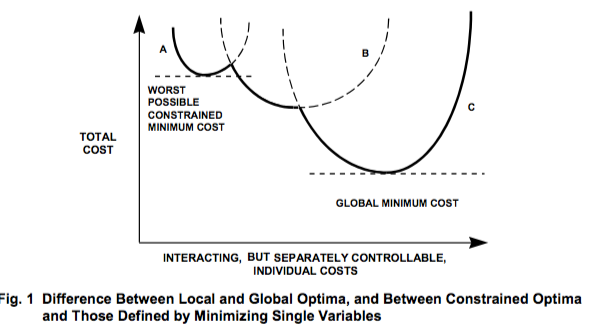 If the prime manufacturer, or systems integrator, cannot make his fortune by giving all his work away, who does benefit? The subcontractors, of course. They have a guaranteed profit margin (if they wrote the contract properly). They have access to free technical advice if they encounter problems, because the systems integrator cannot allow them to fail. A systems integrator has little option but to assist any of its suppliers in difficulty and is often put in the position of accepting additional costs rather than have their entire production line closed and have to pay penalties to every OTHER supplier. The systems integrator, who finally sells the product can raise the price no more than the market will bear. So it is the prime manufacturer, or systems integrator, who absorbs all cost over-runs and whose profits are limited.
The basic problem with being only a systems integrator is that it does not cover a sufficient fraction of the total work for a large company to remain in business. The engines and avionics alone typically represent some 50% of the cost of producing large aircraft.
Under what circumstances IS outsourcing profitable? Having observed that the total number of man-hours involved i na task will increase if it is outsourced, one needs to identify the circumstances under which other factors over-ride the negative influences. The most powerful one is automation. But why should the work not be automated in-house instead?
Outsource work IFF the selected supplier has excess capacity on such equipment. If already fully committed to other customers, makes no sense to allocate work to him with out any improved dimensional control.
It is better to obtain precision parts from outside sources than it is to make imprecise details in-house. (But the converse is equally true.)
If the assembly process is altered by changing the work share, one should expect that there is a need to redesign the product too.
The clear advantage of having a small number of jet engine manufacturers, separated from the airframe manufacturers, is that there are economies of scale, a level of competition, and the means of retaining a critical mass of technical expertise. These are the ideal conditions under which out-sourcing makes sense. The same is true in the avionics industry.
The reason for a high level of automation at the start of the process is primarily due to precision, to reduce the costs of subsequent assembly steps.
***
There is more percentage profit on the distribution of intellectual data, provided that one does not have to pay to have it updated.
A corollary to the Second Law of Thermodynamics states that “perfect efficiency can be achieved only when no work is being done.” It seems strange that, for most hi-tech of industries, it is not appreciated that this same inescapable law of nature applies equally to business activities as well. Yet the traditional implementation of head-count limits, either on the assumption that all skills are interchangeable, or the brief that none are involved, flies in the face of such realities. The goal of perfect efficiency is quite unattainable.

Forbes on “What went wrong at Boeing” and the 787

Boeing lost market share to Airbus… what to do? Could have dropped price of products, OR instead add more value to customers.
immediate customers = airlines
ultimate customers = passengers
Boeing did not plan to provide for such on-site support for its suppliers. In fact, it explicitly delegated this responsibility to sub-contractors. When the subcontractors didn’t perform the necessary coordination, Boeing had to provide the support anyway.
The innovation risk implied a greater involvement by Boeing in the development and manufacture of the aircraft. Astonishingly, Boeing opted for lesser involvement, delegating much of the detailed engineering and procurement to sub-contractors. The result? Unexpected problems have kept occurring that have delayed the project and increased its cost.
Complicated products like aircraft involve a necessary degree of outsourcing, simply because the firm lacks the necessary expertise in some areas, e.g. engines and avionics. However Boeing significantly increased the amount of outsourcing for the 787 over earlier planes. For the 737 and 747 it had been at around 35-50 percent. For the 787, Boeing planned to increase outsourcing to 70 percent.
However key elements of the Toyota outsourcing model were not implemented at Boeing. Toyota maintains tight control over the overall design and engineering of its vehicles and only outsources to suppliers who have proven their ability to deliver with the required timeliness, quality, cost reduction and continuous innovation.
By contrast, Boeing adopted the superficial structure of Toyota’s tiered outsourcing model without the values and practices on which it rests. Instead, Boeing relied on

, which created perverse incentives to work at the speed of the slowest supplier, by providing penalties for delay but no rewards for timely delivery.

Instead of people communicating with people face-to-face, the computer itself was supposed to flag problems in real time. Not surprisingly, the tool failed. Suppliers did not input accurate and timely information, in part due to cultural differences and lack of trust